Flexible OLEDs and all of the gadgets they’ll make possible – like electronic newspapers, roll-up laptops, and wearable computers – are the wave of the future. But they won’t be relegated to sci-fi stories for very long; Sony has just announced that their newest OLED display is thinner than a human hair and flexible enough to be wrapped around a pencil and stretched while still playing video. 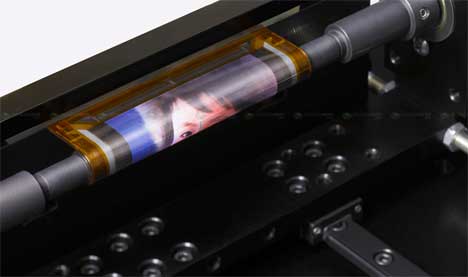 The flexible display measures just 4.1 inches and boasts a 432 X 240 resolution. It’s the first display of its kind that can be manipulated while streaming video and not lose any of the picture quality. It’s OTFT (organic thin-film transistor)-driven, which gives it a high degree of flexibility while keeping the thickness and weight extremely low. The process used to make the display is more environmentally-friendly than the process used to manufacture conventional LEDs.

It’s still early days for the new flexible display, but one of its most-anticipated applications is wearable displays. But we can also look forward to huge leaps in e-paper gadgets and mobile phones with enhanced displays and thinner profiles. Sony plans to put some effort into improving the performance of the thin, rollable OLEDs, so we can look forward to seeing them pop up soon in all kinds of products.