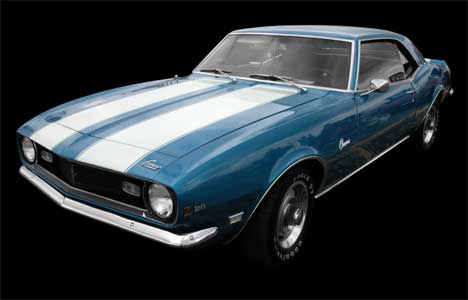 When the Chevrolet Camaro was first unveiled in 1966, it was accompanied by a big, mysterious build-up. The car was meant to be a competitor for Ford’s popular Mustang, and as such it deserved a properly dramatic introduction. A week before the press event that would launch the car destined to become a pony car classic, members of the automotive press received a telegram inviting them to a meeting of the (fictional) group Society for the Eradication of Panthers from the Automotive World. When the press showed up, they became part of history as attendees of the first 14-city real-time press conference conducted over telephone lines. They didn’t get to see the car that day, but they got to hear the name: Camaro.

This commercial for the first-generation Camaro is a delicious little piece of automotive industry history. The two-minute spot plays like a love song to this powerful sports car, but more importantly it features some classically cheesy elements. Over-the-top pyrotechnics and falling prop boulders are meant to show off the car’s fiery, powerful origins. This commercial, and the many others that have followed, must have worked: the Camaro has gone through five generations of redesigns and is still around today. When asked way back in 1966 what a “Camaro” is, Chevrolet managers responded that it’s “a small, vicious animal that eats Mustangs.”