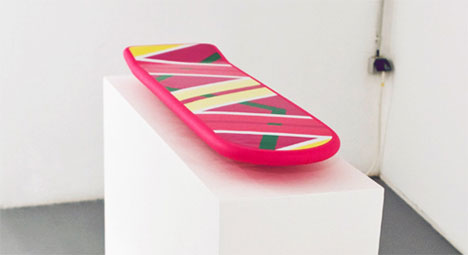 Back to the Future II showed us an awesome future in which we’d all have walls covered in TV screens, automatically-adjusting clothing, video phones and machines that hydrate dinner instantly. By far, the most eagerly anticipated BTTF2 gizmo is the hoverboard, which we assumed would be in every kid’s toy box by now. Of course, as we edge ever closer to 2015 it’s becoming painfully obvious that most of those cinematic predictions won’t come true…including working hoverboards.

There still isn’t a working hoverboard, but French artist Nils Guadagnin has built a replica that will just have to do for now. He calls it a study in sculpture and spatial autonomy, and he’s given it the rather predictable title “Back to the Future.” It’s kept aloft by an electromagnetic system and stabilized by a system of lasers. Sadly, you can’t actually ride the board but it does stay relatively stable above its platform even when poked at. It may not be as good as a functional hoverboard, but we’re willing to wait for Guadagnin to perfect the mechanism that’ll let us hop on board.