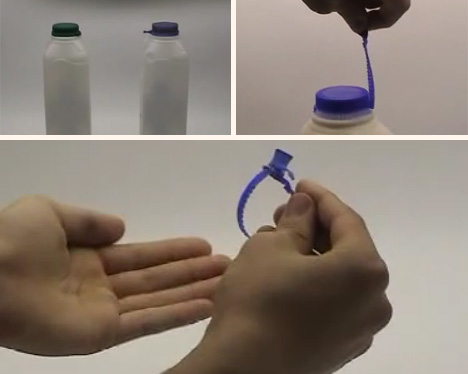 There are little bits of our modern world that, though they serve a purpose, are basically produced just to be thrown away. The little piece of plastic on drink bottles just below the cap is one of those pieces. It serves to hold the bottle closed and show evidence of any tampering before purchase, but when you get the bottle home you just flick it into the garbage. A British start-up has a novel idea for that big of plastic: turn it into something useful and re-usable.

RE:tie turns the plastic strip into a zip tie that can be used for any number of small jobs after the bottle is opened. Tie up the cords in your office, close plastic bags, or hold various small objects together – whatever you would normally use zip ties for. As an added bonus, the zip tie rings are also easier to remove from the bottles than the traditional plastic rings. Assuming that you’re the type of person who would normally purchase zip ties, the idea could end up saving you a bit of money. But if you drink a lot of milk or juice, you might have to start finding new jobs around the home for all of those extra zip ties you’ll suddenly have.

See more in Industrial Design or under Technology. July, 2011.