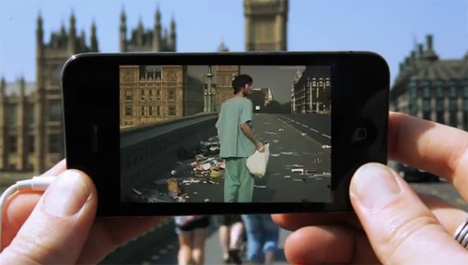 True movie lovers know that there aren’t many things more thrilling than visiting the very locations where your favorite movies were shot. Call it cinematic tourism or just giving your movie experiences a brand new layer; either way, it can be a fun and interesting way to enhance both your movie experiences and your vacation. A new smartphone app called AR Cinema will use the power of GPS along with augmented reality to actually bring you into your favorite films.

Visit a street corner or landmark where a movie was filmed, hold up your smartphone and the app will show you the scene(s) shot there. The demo video shows films set in London, but the developers want to add additional cities. Of course, the people who live in those cities might not be thrilled with the cinema tourists holding up their phones in the middle of the street to watch movie clips, but this awesome idea could add a whole new layer to the tourism trade in cities like London, New York, Toronto and other frequently-used shooting locations.

See more in Futuristic or under Technology. July, 2011.