Some people think that today’s safety concerns are out of control. But when you look back at the insanely dangerous products that used to be marketed and sold, modern safety regulations kind of make sense. Take the Shoe-Fitting Fluoroscope for example: the shoe-fitting device was common in shoe stores from the 1930s to the 1950s, when it was deemed too dangerous. Shoppers stuck their feet into an opening in the bottom of the box, and the shopper, salesperson, and a third person (presumably the parent of a young shoe shopper) could look into the box through the openings in the top. 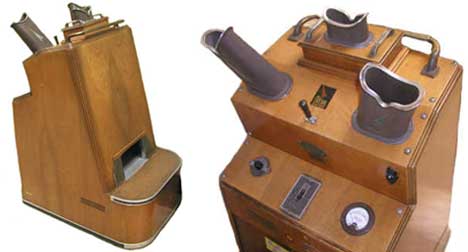 It all sounds innocent enough, but the bottom of the box contained an X-ray tube to show salespeople the bone structure of the foot. Today, we know that constant X-ray exposure isn’t good for anyone’s health. No shoppers were injured by the device, but an unfortunate model who demonstrated the device did receive serious radiation burns that required the amputation of one foot. It wasn’t until the 1950s that the machines were removed from shoe stores in the US, with the UK following suit in the 1970s. 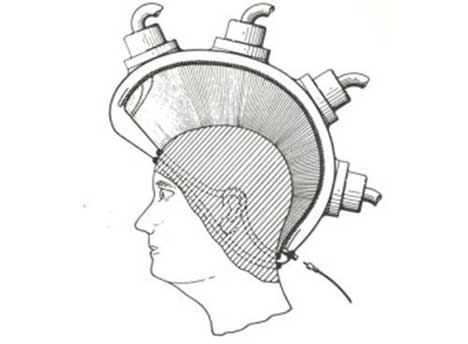 Even the man in the diagram explaining this terrifying device looks unsure of its safety. The hair-singeing device was invented by John Boax in 1951, and was a godsend for everyone with a fear of scissors slicing through their locks. It substituted heat for scissors: hair was sucked up into the chamber and burned off at the desired length by hot electric coils. Boax was granted a patent for his creation, but not surprisingly, it never really caught on. 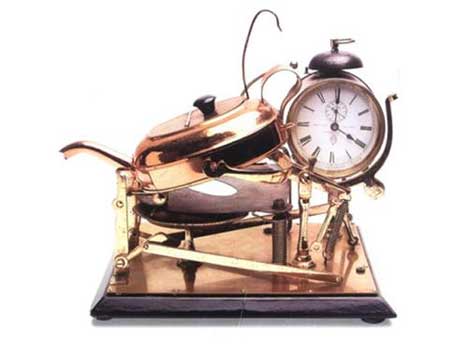 While the device isn’t as popular as it once was, the teasmade was used at the bedside in most homes across the UK. Much like modern coffee machines with timers, the teasmade could be programmed to have some piping hot tea ready first thing in the morning. This 1902 version of the teasmade used an alarm clock, a match, and a portable stove to make a very dangerous cuppa. When the alarm clock sounded, the mechanism struck a match across sandpaper to light the spirit stove. Steam from the boiling water caused the tiny kettle to tip, pouring hot water into the waiting cup or teapot below. Aside from the device lighting something on fire inches from one’s head while one is asleep, we can’t imagine why this method is no longer used.

See more in Antique Gadgets or under Vintage & Retro. March, 2010.