A study by a pair of German archaeologists has turned our understanding of ancient art on its head. For centuries, we’ve assumed that the clean, white surfaces of ancient Greek sculptures were the standard of beauty; during the Renaissance, artists strove to emulate this simple aesthetic in their own art. Even today, we expect truly beautiful classical and ancient art to be pure and unadorned – but Vinzenz Brinkmann and Ulrike Koch-Brinkmann have spent over two decades proving us wrong. 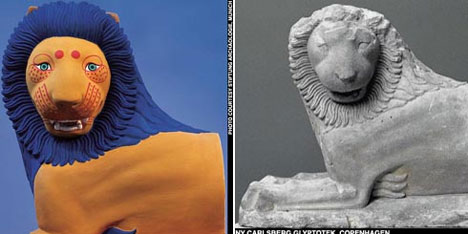 Their research has involved using several high-tech methods to uncover the true intended appearances of ancient artwork. The archaeologists aren’t the first to notice that ancient sculptures featured bits of color, but they are the first to use extensive scientific methods to reveal the colors. Their arsenal included X-ray fluorescence, infrared spectroscopy, and ultraviolet analysis, among other methods.

So why do these ancient sculptures appear white to us now? Quite simply, it’s due to the fact that they have faded and become weathered over the centuries. The paint has worn off, leaving the aged statues with the familiar blank white appearance we’ve become accustomed to. To give a tangible feeling of the originals, the husband-and-wife Brinkmann team have recreated some of these aged statues and painted them in the colors they would have borne in their glory days. 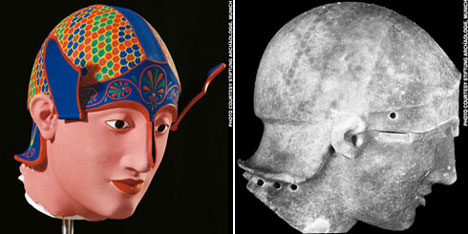 Seeing these classic statues recreated in vivid colors seems gaudy and almost obscene to us today because we expect ancient Greek statuary to bear that dignified blank white look. But when they were created, bright colors helped to give detail and depth to the sculptures. According to the artists and art lovers of that time, bare statues were ugly and unsightly. The Brinkmanns’ statues have been travelling the world as a popular museum exhibit since 2003.