The smallest cars ever commercially produced were the Peel microcars, a line of tiny automobiles made on the Isle of Man. Only a small number of Peel cars were produced in the 1960s, but their tiny size and unique three-wheeled bodies have made them immensely popular with car enthusiasts and lovers of strange retro objects ever since.

The Peel P50 had only one seat, and was advertised as having only enough room for a driver and a shopping bag. The overall unladen weight of the car was a tiny 130 pounds, making it a terrifying little bubble to drive on a busy motorway. With a top speed of just 38 MPH, it probably wouldn’t have been a great idea to take it on the motorway in the first place. 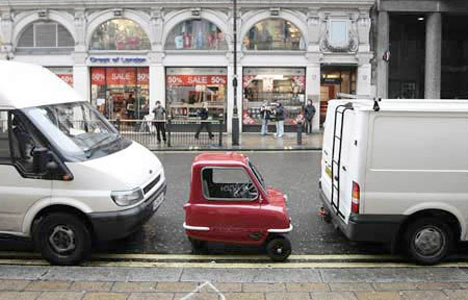 Both the Peel P50 and the later model Peel Trident were sold for under £200, which was cheap even in 1960s currency. The bodies were solid fiberglass with no chassis, making for a lightweight vehicle that could be dragged indoors for safekeeping if desired. Since the three-speed manual transmission didn’t include a reverse gear, pushing and pulling the car by the handle on the back were pretty common occurrences. 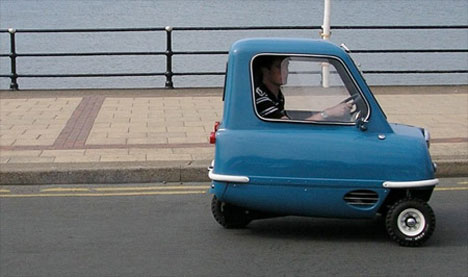 The company that manufactured Peel cars claimed that both models got around 83 miles to the gallon – impressive specs that make the micro-cars seem more appealing today. Unfortunately, Peel didn’t last long as a manufacturer, but there are many Peels still running in the UK and in other countries. The cult status of these tiny cars ensures that they’ll always be greeted with a smile wherever they turn up.

See more in Cars & Trucks or under Transportation. July, 2010.