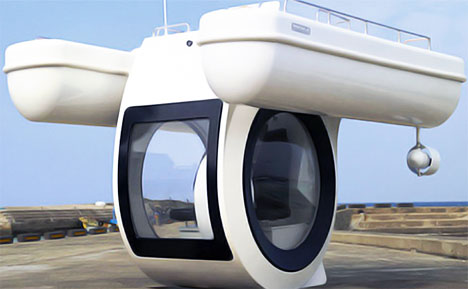 A day of boating is pretty great already, but it doesn’t give you much of a chance to experience what is going on below the surface of the water. This semi-submarine combines the best of boating with the thrilling ability to step below the surface and see what is happening underwater – all without the need for a special operator’s license.

The Ego is a compact personal semi-submarine designed by Korean company Raonhaje. It might be best described as a submersible capsule beneath a floating private island. The controls are very similar to those found in a car so that drivers can easily adapt to operating the Ego.

This very cool compact submarine can reach a maximum speed of five knots with its dozen 8-volt marine batteries. Because of the electric motor, the craft can venture into protected environments where gasoline motors would not be allowed. Six to ten hours of charging will net you anywhere from four to eight hours of cruising through the water. Two-seat prototypes have already been produced and should go on sale very soon; a four-seat version is also in the works.

See more in Mods & Custom or under Transportation. March, 2011.