10,000+ Subscribers
The Last 50 Years of Space Exploration on One Map

Space exploration has gone a very long way in a relatively short amount of time. Just 50 years ago, space missions were all about unknown factors and figuring out what would work. Now we’ve got rocket science down to, well, a science, and space missions are more routine. Have you ever wondered what all of the missions of the last 50 years were about? National Geographic created a map of all of them, showing how often we’ve visited (or attempted to visit) our interstellar neighbors. 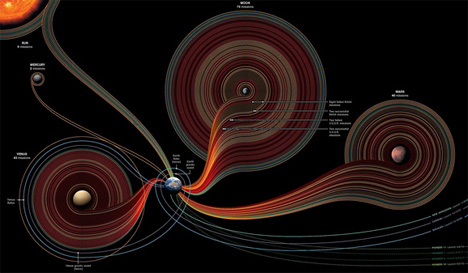 Most space missions have been to our nearest neighbors, but some have attempted to explore the great wide open. In fact, New Horizons is still out there, headed toward Pluto. Seeing all of the missions gathered in one place gives a great deal of visual impact and reminds us that, even though NASA launches aren’t as closely watched by the entire world as they once were, space agencies around the world are still working toward understanding our Universe a little better. Check out the full-size map here, or the National Geographic zoomable map here.