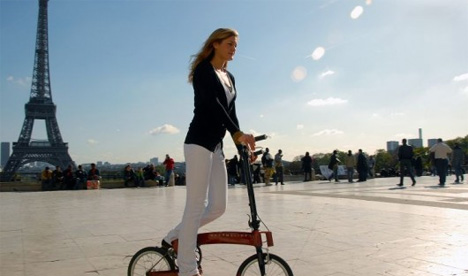 The bicycle has been called the perfect machine. It’s simple to use, it doesn’t add to air pollution, and it actually increases your health while getting you from one place to another. Still, there are always improvements to be made – and the major tushie pain caused by bicycle seats is a big one. French rollerblader Jean-Marc Gobillard has made a major contribution to the future form of bikes with the Dreamslide. It is technically a bicycle, but looks sort of like a scooter with too-big wheels…or a bike missing a seat.

The Dreamslide was made to overcome the major problems of traditional bikes: namely, the “dead zone” that occurs when pedaling and the need to stand up to pedal when going uphill. The unique layout of the bike removes the seat entirely and has the rider standing on two small footboards. The pedals don’t go around in the same way traditional pedals do; rather, they move independently of one another and eliminate the body-weight bobbing that you might expect from a standing-position bike. 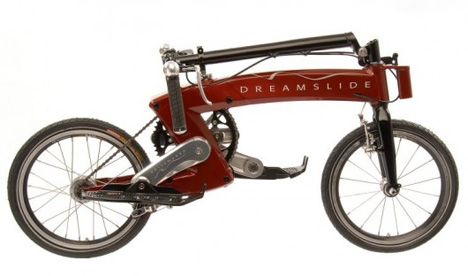 With all of these positive changes to the biking experience, Gobillard says that his creation helps riders get more power out of their pedaling while easing the stress on their joints. By moving the rider to a standing position, the Dreamslide also makes it possible to use body weight as a secondary steering mechanism, giving the rider a greater degree of control over the bike. It’s compact and lightweight, and it even folds up to fit into small spaces. We’re definitely looking forward to seeing this crazy bike take the place of rollerblades in the urban environment. The Dreamslide is available now in Europe for €1250 (around $1680), or you can order it from the company’s website.

See more in Bikes & Cycles or under Transportation. September, 2010.