10,000+ Subscribers
Soil-Powered Alarm Clock Gets Your Bambooty Out of Bed 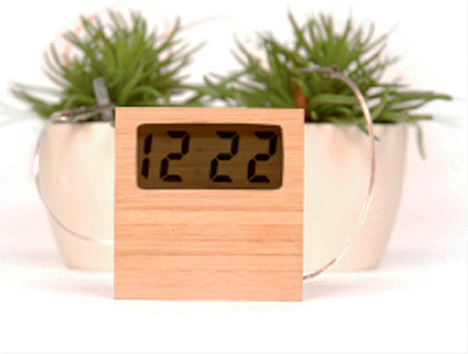 Just when we think that nothing new can be done with clocks, someone else makes a wicked cool new one that makes us stand up and pay attention. This awesome bamboo soil clock comes to us from Dutch designer Marieke Staps, and all it asks for from you is two potted plants and some moisture. The designer says that the biological processes in the soil produce enough bacteria to power the clock. We have to wonder if it’s the plants providing these processes, or the dirt itself. Because we can think of some people who would kill those plants within days, but watering pots of dirt would probably be possible. Regardless, Inhabitat (which sells the clock in their store) says that you can use any two plants to provide electricity for this super-cool clock.

The clock itself, excluding the electrodes and wires, is made of bamboo, which is an extremely renewable, sustainable material. And unlike some science-project-type timepieces (we’re looking at you, potato clock), this one is actually quite attractive. You just push the zinc and copper electrodes down into the dirt of your two potted plants and make sure to keep those plants watered. Just don’t use vegetables or herbs: the zinc electrode degrades into the dirt in time and you don’t want that coming up in your tarragon. You can make your potted plants finally pull their own weight in your house for less than $40.

See more in Clocks & Watches or under Gadgets. November, 2009.