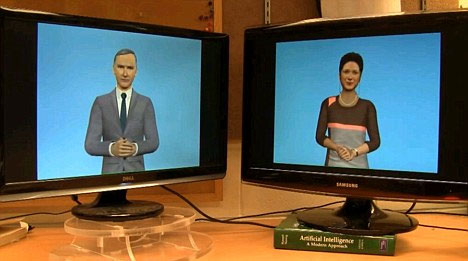 Ever since humans first conceived of the idea of mechanical people, we have been wondering what it might be like to have a conversation with a robot. What kind of topics would an artificially intelligent creature want to discuss? We’ve been able to talk with online chatbots for lots of years: they do online customer service for companies like Ikea and HP. But two students at Cornell University in New York wondered what would happen if the chat bots were left alone to talk amongst themselves.

The video above demonstrates the type of conversations chatbots engage in when left to their own devices. Not surprisingly, they are kind of jerks to one another. The two Cleverbots learned their conversational skills by interacting with humans, which may explain why they are so argumentative. Why the male chatbot thinks he’s a unicorn, though, is anyone’s guess.

See more in Digital Design or under Technology. September, 2011.