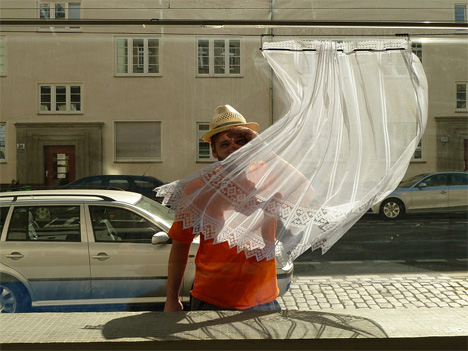 Mad inventor Niklas Roy was looking for a little privacy in his workshop (an old storefront with a huge street-level window), so he did what any mad inventor would do: he created a crazy contraption. Rather than buying curtains that would cover the entire window, he built a robotic curtain that spots pedestrians on the sidewalk and moves with them to block their view of the inside. Dubbed “My Little Piece of Privacy,” the curtain delivers anything but.

The setup consists of a surveillance camera, a laptop and a curtain on a simple track. When someone walks by outside, the camera tracks their movement and moves in front of them to keep them from spying. So how well does the “smart curtain” work? Not well, according to Roy. It seems the novelty of a robotic curtain attracts more attention than his little shop would ever have gotten otherwise. In fact, he says that his window has become the star of his Berlin street. A practical failure, perhaps, but a win for crazy inventions. You can grab the motion-tracking code and the entire schematic for your very own robotic curtain over at Roy’s website.