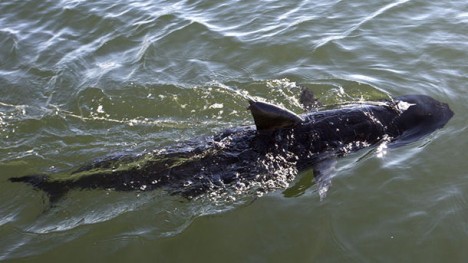 The U.S. military is pretty deeply involved in studying the ocean and gathering information on tides, currents, weather conditions, and potential dangers underwater. Until now, they’ve employed a variety of methods, including strapping cameras to trained dolphins. But a new unmanned underwater vehicle called GhostSwimmer could outshine all of the current techniques by looking and acting just like a fish.

The swimming drone weighs nearly 100 pounds and is about five feet long; it propels itself through the water by oscillating its tail just like a real fish. It’s the size of a tuna but takes on the appearance of a small shark with a dorsal fin that protrudes above the water when the drone is swimming near the surface. It can operate in depths from 10 inches up to 300 feet, making it ideal for intelligence, surveillance, and reconnaissance missions. The Navy points out that it can also help with inspecting the hulls of the U.S.’s own vessels. 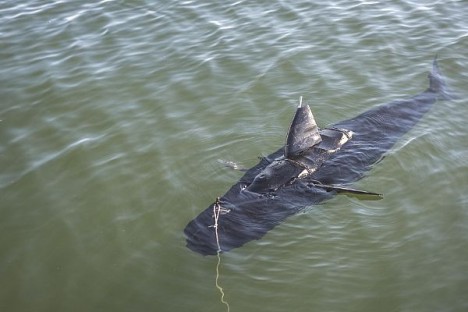 Operators have the choice to send the drone out on its own, untethered, to explore and gather info. In that case, it has to surface periodically to transmit its information to the base station. It can also be operated on a 500-foot tether, which is an ideal setup for inspecting ships’ hulls because it can transfer data in real time. 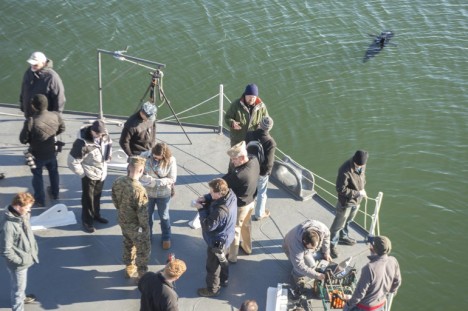 GhostSwimmer was developed with Boston Engineering to be the next in a long line of emerging technology gadgets used by the U.S. military to get their jobs done more efficiently. Although the drone’s testing phase has been completed, there’s no word from the Navy on when or where it might be deployed – so it’s still a good idea to think twice before approaching a swimming shark to check for an antenna on its head.

See more in Robotics or under Technology. January, 2015.