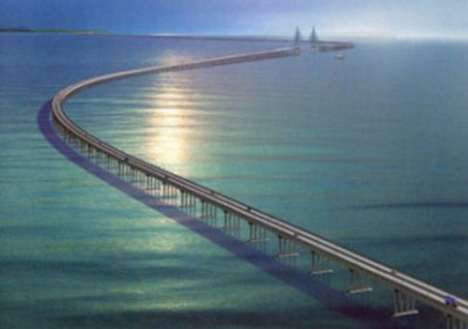 The world’s largest marine causeway is set to begin construction, and it’s a damn big project. The Qatar-Bahrain Friendship Causeway (which, for us anyway, conjures up some misleadingly cute mental images) will connect Qatar and Bahrain with a much-reduced drive time: about 30 minutes as compared to the current 4.5 hours. Once construction begins in early 2010, the entire project is expected to take just about five years to complete. And when it’s done, the causeway will handle around 10,000 to 20,000 vehicles a day. (The Lake Pontchartrain Causeway, pictured above, is currently the world’s longest causeway.) 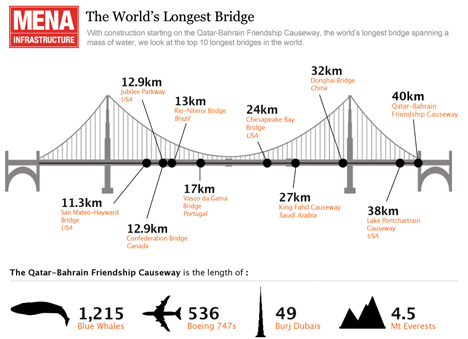 Overall, the link between the two countries will consist of a series of bridges and roads built on causeways. From end to end it will measure around 40 km (about 25 miles) and be suitable for both road and rail travel. The picture above gives an idea of how massive this thing will really be, measured conveniently in blue whales and Mt. Everests. It’s a feat of engineering not only because of its size, but because the supports will pass through some very difficult water. The waters of the Arabian Gulf contain high levels of chlorides, sulphates and mollusks, all of which can be very structurally damaging. But all of that impressive engineering will come at a pretty steep cost: around $3 billion.

See more in Mass Transit or under Transportation. October, 2009.