10,000+ Subscribers
No Trojan Horse: Art Viruses Made of Computer Parts 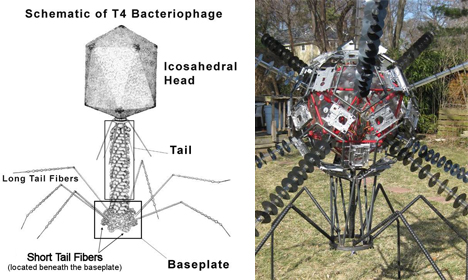 Have you ever wondered what to do with an old computer you don’t want anymore? Sculptor Forrest McCluer rescued 30 old personal computers from the landfill and decided to do something fantastic with them. He’s deconstructing them and using the parts to make incredible sculptures. This set of sculptures consists of computer-part renderings of actual viruses. Above is “Floppy,” based on the shapes of T4 Bacteriophage and Adenovirus 36.

“Wilco Toroidal” is a sculpture based on the AIDS virus. The yellow nodules around the outside, says the sculptor, are similar to the toroidal inductors found in the power supplies of computers. McCluer has said that each of his sculptures presents a unique set of challenges, and he has been working on the larger 30 Computers project since 2001. 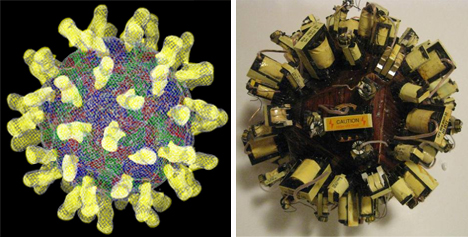 The “Transformer Virus” was modeled on the rhinovirus, or common cold. Despite the name, this sculpture doesn’t turn into an awesome talking robot; it is so named because the protruding yellow parts are transformers from 30 PC power supplies.

“Capacitor Virus” is another representation of the rhinovirus, this time featuring capacitors from PC power supplies. McCluer’s work was exhibited most recently at the 10th annual Artomatic in Washington, DC. 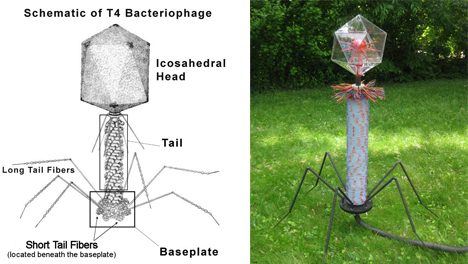 The “T9 Track Virus” is another version of the T4 Bacteriophage. It consists of PC power supply cables, CD-ROMs, sections of 9-track magnetic tapes, and parts of floppy drives. When the piece is on display, McCluer scatters a pile of unraveled 9-track tapes under it to represent the bacteria cells destroyed by the T9 Bacteriophage Virus.

“Magneto” is a representation of the Mammalian Orthoreovirus, and consists of a foam-filled wood base covered with 32 magnetic disks from floppy drives. McCluer has divided his project up into several sections, with each section using a different set of parts from the discarded computers.

See more in Art of Tech or under Technology. September, 2009.