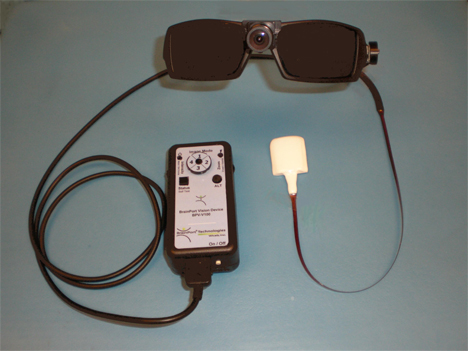 Visually impaired people may soon be able to “see” the world around them without the need for implants or surgery. The BrainPort device, created by Wisconsin-based Wicab, Inc., consists of a pair of sunglasses with an embedded camera, a hand-held CPU/controller, and an electrode-laden paddle which sits on the user’s tongue. Visual information is passed through the camera, turned into electric impulses, and related to the brain through the tongue.

Certain electrodes provide an electric charge, while others convey no charge. The impulses aren’t painful; some users describe them as feeling like champagne bubbles on the tongue. The large number of nerve endings in the tongue process the impulses into a grainy black-and-white image, allowing the user to “see” his or her surroundings. Though it’s been tested and is known to work, the curious thing is that no one is sure exactly how it works: does the brain interpret the signals as visual or tactile? Different interpretations by the brain would mean that different cortices are activated. Regardless of which cortex processes the information, though, the user is able to effectively make out high-contrast shapes, movement and even some aspects of perspective. The current resolution is between 400 and 600 points, but the makers are currently working on models with much higher resolution.

Since the BrainPort doesn’t rely on implants, surgery or irreversible changes to the body, it has to potential to be a widely-used device. It could be used by people with a wide range of visual impairments, from those with macular degeneration to those who are completely blind. There is only a very small learning curve when first using the BrainPort; most users are able to master its use within two to ten hours. Within minutes of putting it on for the first time, users begin to understand spacial relation and movement. The device is currently being tested by subjects and will soon be evaluated by the FDA.

See more in Cybernetics or under Technology. September, 2009.