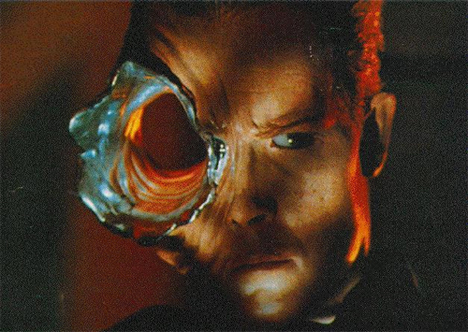 Imagine carrying only one tool when you set out to fix a leaky pipe or change the oil in your car. That could be possible in the future with shape-shifting tools that morph to become whatever size and shape you require. Self-reconfiguring robots have been a dream of scientists for a very long time now, but current technology makes them nearly impossible. So far, most of the research in the field has focused on shape memory materials, which have a long list of limitations. But now, research is leaning toward shape-shifting robots made up of cell-like modules; the small shapes reconfigure themselves into whatever form is needed. DARPA is interested in the future of self-configuring robotics and recently dedicated $4 million to a set of six-month studies that will explore the possibilities of programmable matter, self-configuring robots, claytronics and other similar technology.

The above video shows the direction that the research is going in. So far, a robot composed of cell-like modules is able to rebuild itself after being kicked into pieces. But obviously, this robot wouldn’t be of use to anyone for much more than entertainment. Researchers involved in this project and others hope that eventually, the self-assembling machines will be much smaller – maybe even the size of individual grains of sand. When the “smart sand” is given a command, it would assemble itself into a tool or machine based on the user’s need; after the job is done, the tiny “sand” grains would simply return to their dissembled resting state or morph into the tool needed for the next task. This would be a huge advantage for astronauts, for example, who only have limited space for carrying tools. So far, only small arrays have been built: the largest contained 50 modules. And of course, the overarching problem of controlling each individual module would have to be addressed before the technology could be used practically. But whatever happens, hopefully we’ve learned enough from movies to stay away from artificially intelligent self-assembling assassins.

See more in Robotics or under Technology. February, 2010.