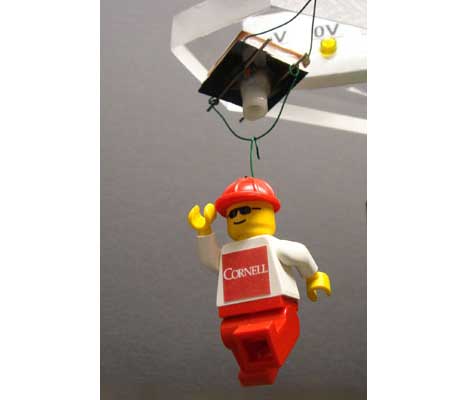 DARPA has been funding superhero-inspired technology for years now, so it’s no surprise that they’ve teamed up with researchers at Cornell to create a futuristic palm-sized Spiderman-type device that will allow humans to scale walls, walk across ceilings, and perform gravity-defying operations with ease. The three-layer device uses surface tension and an electrical charge to create an incredibly strong bond that may be able to hold 15 pounds per square inch of device surface.

The palm-sized device consists of a metal plate dotted with super-small holes, a middle layer made of a porous material, and a bottom layer with a reservoir that holds water. A nine-volt battery supplies power to push water through the tiny holes, creating surface tension that can grip another surface. When switched on and off rapidly, the electrical charge could allow the device to be used for real-time ceiling or wall jaunts. The team found that the smaller the holes, the greater the adhesive force of the device.

The project, headed by engineering professor Paul Steen and former postdoctoral associate Michael Vogel, was funded by both DARPA and the National Science Foundation; the findings were published in the online Proceedings of the National Academy of Science.

See more in Weird Science or under Science. February, 2010.