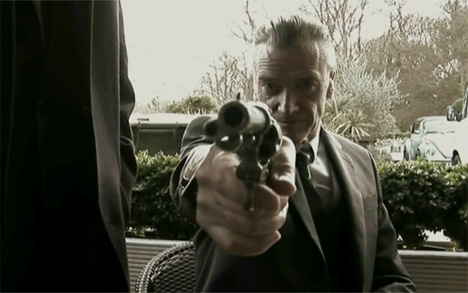 As a weird sort of hybrid between Strange Days and a Choose Your Own Adventure book, MyndPlay is a futuristic entertainment system that lets you, the viewer, determine what will happen in the movie you’re watching. The headset sensor reads your brain waves to figure out your movie-outcome desires, then bends the plot to give you just what you want.

With this system, viewers wear a headset that reacts to their reactions. As brainwave patterns emerge, the software determines what you want to happen and then makes it so. If you are annoyed by the hero, you can make him expire in the next gun fight. If you desperately want a happy ending, that is exactly what you’ll get – provided, of course, that your choices mesh with the pre-recorded scenarios.

The video system was recently debuted in the UK. The headset technology was developed by NeuroSky as a brainwave-based gaming controller. The MyndPlay player software is free, but you’ll need the £79 (about $130) headset to make it work. Movies cost between 99p and £3. Currently, only two movies are available but there are a few interactive games which also use your brainwaves to make amazing things happen.