10,000+ Subscribers
Mind Games: Four Games You Control With Your Brain 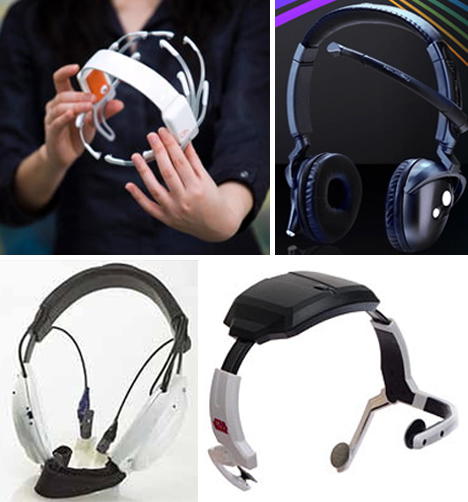 Forget using your body to control your video games, or making realistic motions with a game controller to make similar movements in the game. The future of toys and video games will be the ones that only require you to sit still, concentrate and use your brain. The EEG technology used in hospitals to measure brainwaves has found its way into the consumer market in the form of games that let you move control the game piece or character just by thinking really hard. The games using the technology are currently pretty simple, but it’s easy to imagine that mind-controlled games could soon let you do everything that games with hand-held controllers do now. 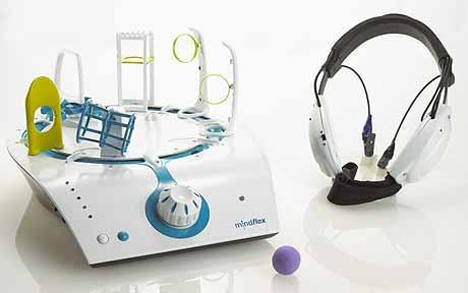 The Mindflex, made by Mattel, requires you to wear a funny headset to move a little ball through a 3D maze of plastic bits and pieces. The harder you concentrate, the harder the console’s fan blows, making the ball float higher. When you relax your mind a bit, the air flow gets weaker and the ball descends accordingly. Eventually, you learn to control the intensity of your brainwaves to get the desired result and push the ball through the maze. The Mindflex debuted at the beginning of 2009 and is in stores now for around $60-$80. 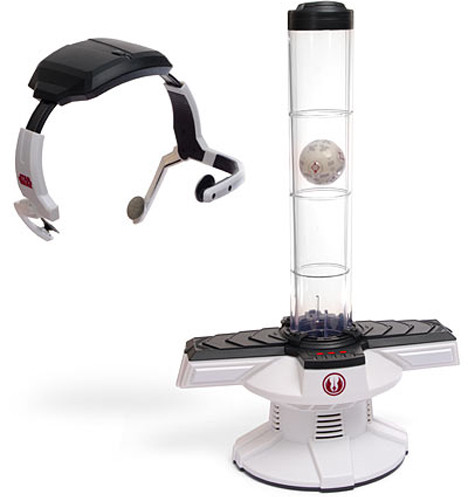 A simpler toy that uses the same brain-controlled air stream concept is the Star Wars Force Trainer. It doesn’t involve any complicated mazes or guiding the ball through hoops; you just have to control the flow of air to Yoda’s cues. As you learn to control your concentration and brain waves more effectively, you move through the Jedi ranks. Hopefully the constant Star Wars sound effects don’t distract you from achieving your destiny. If you’re ready to start your training, the Star Wars Force Trainer is available from Think Geek for around $130. 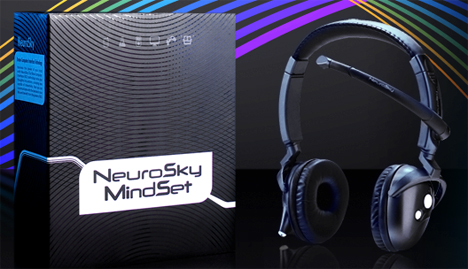 The technology used in both of the above toys was developed by NeuroSky, a San Jose, California-based company. They also offer their own take on brainwave games with the NeuroSky Mindset. The headset looks a little like a hands-free telephone headset with the microphone in the wrong place. The starter set comes with “Brainwave Visualizer,” an application that lets you control on-screen shapes based on your state of mind. A demonstration of The Adventures of Neuroboy is also included; the demo has you use your mental muscles to push, pull, lift and burn on-screen objects. A game called Math Trainer is also included with the Mindset, and apparently lets you answer math questions with your mind. Several other applications are in the works, and NeuroSky seems devoted to figuring out fun new ways to use brainwaves as entertainment. The company even offers development tools to help users create their own games and content for use with the Mindset. Get the starter kit from NeuroSky’s online store for $199.

The Emotiv headset looks eerily like the headsets in Strange Days, but it’s guaranteed not to cause those unpleasant side effects. Instead, the Epoc headset is used with a Windows PC to play a variety of concentration-based games. The basis of the headset’s abilities rests on a several-second-long calibration that you perform before playing one of the mini-games. In the calibration, you perform a brain activity of your choice (concentrating, relaxing, thinking about something in particular) and during the action part of the game, you simply perform exactly the same activity. The headset doesn’t read the type of activity; it simply matches the brainwaves between the calibration and the game. Though the release has been delayed a few times, the Emotiv headset looks just about ready to drop. It’ll come with a game that lets you push and pull boulders, levitate objects, and other telekinesis-like activities.

See more in Cybernetics or under Technology. November, 2009.