10,000+ Subscribers
Linebacker-Sized Humanoid Robot Can Balance on One Foot 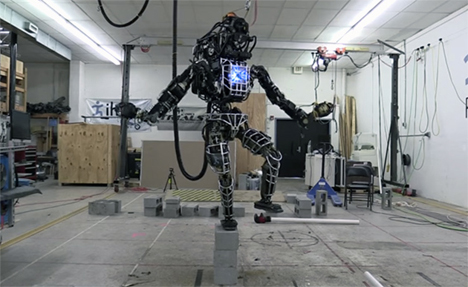 The day when robots will do all of our dangerous work for us is quickly approaching, and Google-owned Boston Dynamics‘ walking, self-balancing robot Atlas is a big step (no pun intended) toward that goal. The 6’2″, 330-pound humanoid robot walks on two legs to leave its upper appendages free for lifting, carrying, and manipulating objects. It’s designed to navigate difficult terrain and even to crawl on all fours or climb when its surroundings call for some more flexibility in getting from one point to another. 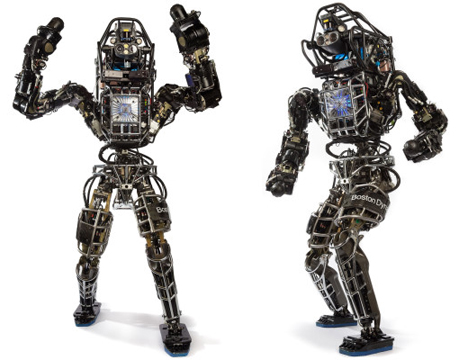 The Florida Institute for Human & Machine Cognition has been working on Atlas’ walking and balancing algorithms, including a feature that lets the robot recover from tripping or being pushed. Their newest video demonstrating Atlas’ impressive abilities shows the enormous robot balancing on one foot atop a pile of cinder blocks. This may seem like a small feat for a robot – you could stand your old tin robot on a pile of bricks and it would stay there, right? But Atlas is a dynamic moving robot that can self-correct its position to keep it in place as it moves its arms, much in the way a human body does.

In the video, Atlas adopts the “crane” posed demonstrated in the final fight scene of The Karate Kid: one leg bent and raised high and both arms raised over the head. Atlas adjusts its center of gravity as its arms move around, which would be a feat for a lot of humans. Disappointingly, though, it doesn’t actually do the crane kick in the end. The robot is currently in development, with large groups of researchers dedicating their time to various aspects of its movement. They envision Atlas being able to perform actions that are too dangerous for humans, such as ammunition handling, rescue missions, and bomb disposal.

See more in Robotics or under Technology. November, 2014.