Would you be more likely to run for exercise if your running helped to power the city you live in? The Green Wheel concept is like a gigantic hamster wheel for humans that not only helps keep people fit; it supplies green energy to power street lights and traffic lights. 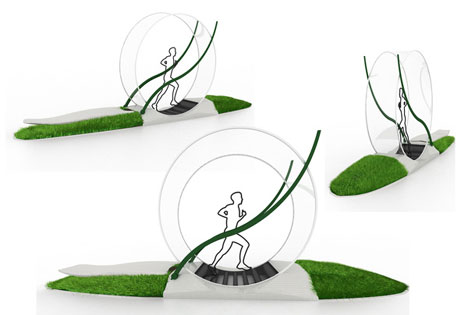 The concept of designer Nadim Inaty, Green Wheel could be placed in public spaces where runners may donate their workout time to keeping the city in lights. By running on the wheel and moving the attached dynamo, exercisers can generate electricity that doesn’t rely on fossil fuels and might even result in some positive physical changes. 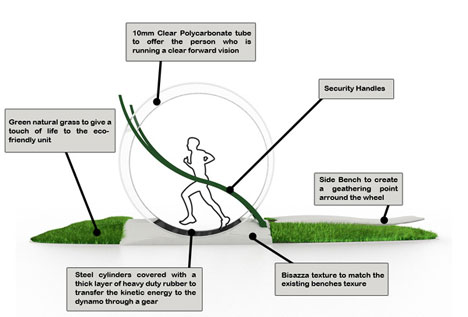 According to the designer, pieces of artificial turf would be placed around the wheel in order to provide runners with a more pleasant, picturesque experience. The wheel itself would be transparent to allow an unrestricted view of the surroundings – though we suspect that the plastic would soon become scuffed and filthy from all of those shoes. 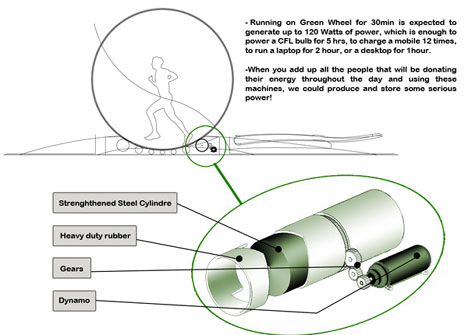 Runners need not worry about falling out of the wheel as they generate electricity for their town: a safety rail prevents such accidents. When flipped up to allow a runner to enter or exit the wheel, the rail also holds the setup still to allow a user to climb in or walk out. 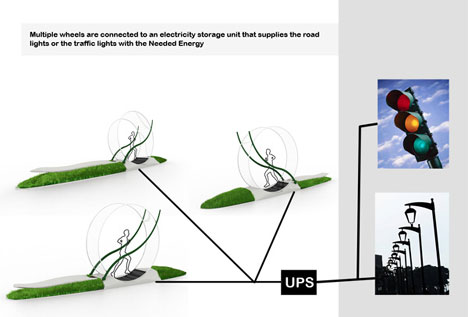 There would be a huge potential for abuse in a setup like this, of course, but it’s a wonderfully inventive concept. It’s unusual ideas like this that wind up making the biggest difference of all in the long run. If such an energy-generating plan is ever actually put into place it could be a huge benefit to cities and to runners everywhere.