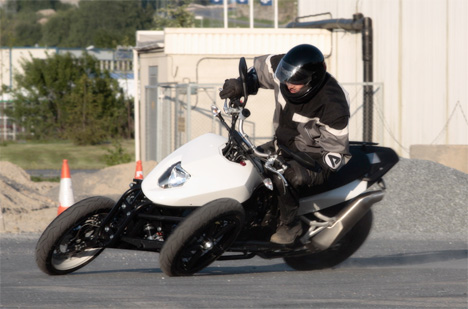 Motorcycles are cool, but pretty dangerous. ATVs are fun and a little more stable, but not street legal. So how great would it be if someone made a mash-up of the two? Brudeli Tech bestowed the gift of the Leanster upon the world, and nervous wives and mothers all breathed a sigh of relief. It’s got the speed and maneuverability of a motorcycle, but because of its dual front wheels it’s not as easily tipped over.

In fact, the rider can comfortably lean 45 degrees into a turn because the bike’s body and wheels pivot safely to allow for sharp turns while the footboards stay parallel to the ground. Brudeli’s intention with the 654L Leanster was to enhance the motorcycle experience, and it would seem they’ve done just that. By putting the extra wheel at the front rather than the back, they’ve added a large amount of stability. And by allowing the body and wheels to pivot, they’ve maintained the maneuverability that makes motorcycles such a popular way to get around.

The Leanster is street legal in Europe, and is intended for use mainly on streets rather than off-road. If you get the irresistible urge to rush out and buy one, it’ll run you around 19500 Euros (about $25000). A steep price, maybe, but at least your mom will sleep better at night knowing you’re riding a slightly less dangerous motorcycle.

See more in Bikes & Cycles or under Transportation. December, 2009.