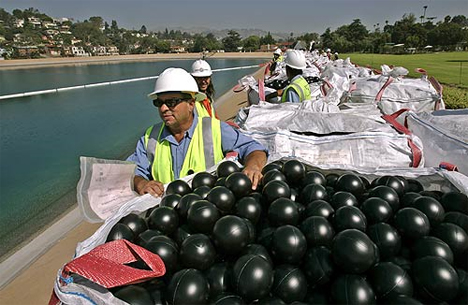 People passing by Ivanhoe Reservoir in LA have been getting a rather interesting view for the past year: scores of black plastic balls floating on the surface of the water. Is it some art project or political statement gone crazy? A bizarre attempt to poison the water? Actually, the balls were part of a plan to make LA’s drinking water safe. The project was started in June 2008.  At the beginning of the ball-dumping, organizers expected there to eventually be 3 million balls covering the Ivanhoe and Elysian reservoirs. 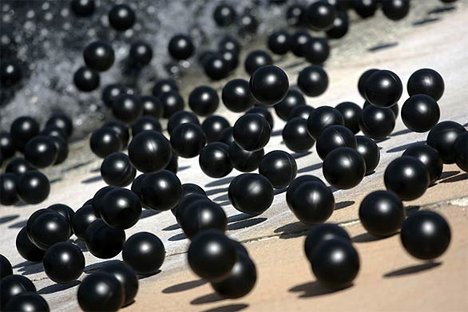 So how exactly do millions of plastic balls equal safe drinking water? The problem was the carcinogen bromate, which forms when bromide (inherent in the water) combines with chlorine from the purification process and the water gets a generous exposure to sunlight. The levels of bromate in the reservoir water were so low that it would take a lifetime of exposure to even possibly cause cancer, but obviously that was a risk that no one wanted to take. Many solutions were proposed to rid the reservoir of its bromate excess: huge tarps and a metal awning were just two. The ball idea seemed the most cost effective and expedient. 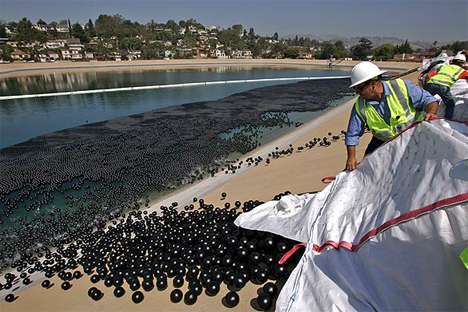 After 600 million gallons of contaminated water were disposed of, the balls started rolling in. About 400,000 of them were released at first, with a new batch added every week. The supplier of the balls, Orange Products, basically shut down production on all other products to concentrate solely on the LA reservoir balls. Incidentally, these are the same type of “bird balls” used at open water sites near airports to keep birds (a potential hazard for the planes) at bay. That the bird balls will help stop birds from contaminating the reservoir water is an added benefit to this plan of action.