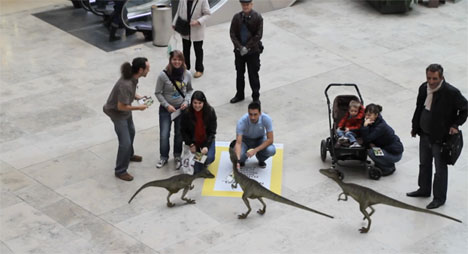 National Geographic has been offering us the chance to learn about amazing things for a very long time. Now they’ve stepped into the 21st century with a very cool touring augmented reality display. The exhibit allowed participants to mingle with dinosaurs, jungle cats, astronauts and more – all while enjoying a leisurely day of shopping.

The above video is from an installation in a Hungarian shopping mall. Shoppers were instructed to stand on a certain spot on the floor and watch the large overhead display. On the display, a bizarre parade of creatures began to march through the crowd, seemingly interacting with the people. As far as live-action augmented reality displays go, this one kind of blows most others out of the water.

See more in Digital Design or under Technology. November, 2011.