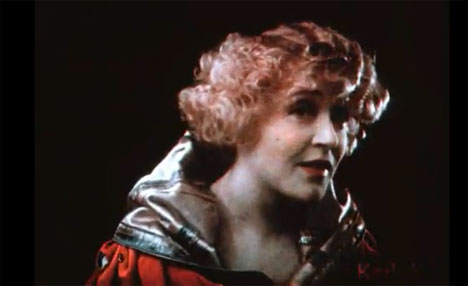 Although the first full-length color movie wasn’t released until 1935, there were experiments in color well before then. This film test was produced by Kodak in 1922; the original film was only recently scanned to create this digital version. The color palette is pale, almost otherworldly, due to the process used to transform the black-and-white negative stock into color moving pictures.

This isn’t the oldest example of color motion picture, but it is a fascinating example from the birth of a new technology. According to George Eastman House, the repository for early Eastman Kodak film stock, the two-color system used to create color in early film was a subtractive color system. “Shot with a dual-lens camera, the process recorded filtered images on black/white negative stock, then made black/white separation positives. The final prints were actually produced by bleaching and tanning a double-coated duplicate negative (made from the positive separations), then dyeing the emulsion green/blue on one side and red on the other.”

See more in Vintage Videos or under Vintage & Retro. August, 2010.