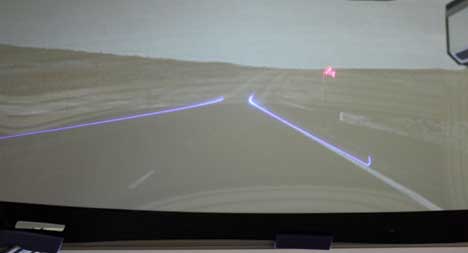 Making driving safer is a priority for car manufacturers, and GM is stepping up with research in an augmented reality driving safety system that will put other car safety features to shame. Forget reverse sensors and digital tire pressure readouts; their proposed system will help you see in the fog, detect upcoming obstacles, and even highlight the exact building you’re looking for. The heads-up system would track your head and eye movements to tailor its actions to your needs at every second. In combination with a number of exterior sensors, the system would help drivers deal with all kinds of difficult driving situations. 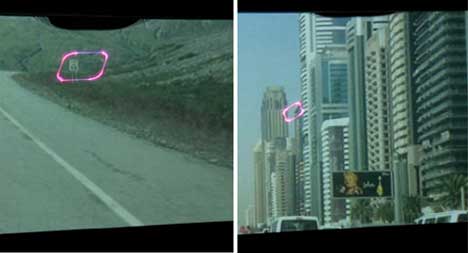 The system’s information would be displayed right on the windshield, which would be coated with a layer of transparent phosphors. It’s similar to the current heads-up windshield displays that tell you things like time, direction and temperature, but much more sophisticated. An integrated GPS system would guide drivers to their destination without requiring that they look away from the road, which in itself could save hundreds of lives. But the system would also give warnings about animals on the side of the road or vehicles in the driver’s blind spot, help define the edges of the road, and highlight roadside signs.

One of the biggest obstacles to a complex system like this is making sure that the information it provides is helpful, but not distracting. It’s easy to imagine that a big highlighted box right on your field of vision could throw you off a bit, so GM – in cooperation with Carnegie Mellon University and the University of Southern California – is working to balance all of the system’s factors. General Motors’ research group believes that a ssytem like this could be on the market as soon as 2016 or 2018.

See more in Cars & Trucks or under Transportation. March, 2010.