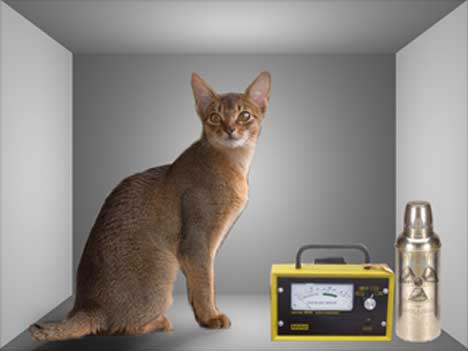 Part of the reason the field of quantum mechanics seems so confusing is that it’s hard to really see the theories in action. A physicist can talk about qubits and atoms all he wants, but we laypeople still say “pics or it didn’t happen.” Well, we still don’t have pics (unless you count the delightful illustration of the Schrodinger’s cat thought experiment), but a researcher at UC Santa Barbara has made progress in bringing quantum systems into the sight of ordinary people. Andrew Cleland and his team created the first mechanical device that both operates as a quantum system and can be seen with the naked eye. 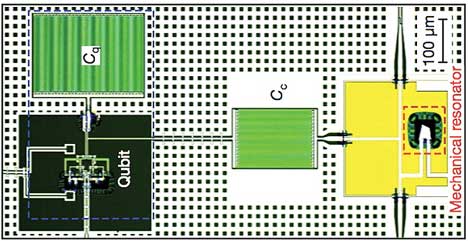 The device is little more than a simple piezoelectric resonator made of a teeny-tiny piece of quartz-like material attached to metal plates. The material expands and contracts – kind of like a balloon – with electrical voltage administered at a very precise high frequency. A qubit was then “wired” to the resonator. The device had to be cooled nearly to absolute zero to eliminate most of the atomic movements of the qubit and the resonator. And once the team excited the qubit with a pulse of energy, the resonator fluctuated. For the first time ever, quantum vibrations could be observed on a macro scale. If you’ve been completely lost by all of this talk about qubits and resonators, the short version is this: the device converts a quantum state to mechanical vibrations. And compared with other, similar experiments, it’s gigantic. 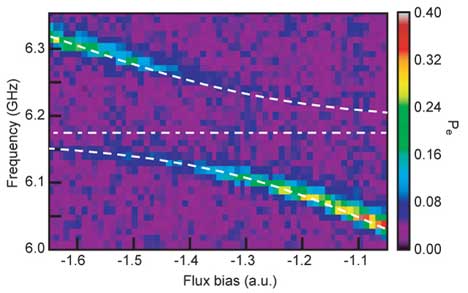 In the above illustration, the team’s prediction of the device’s behavior is represented by dashed lines – the actual data matched very closely. Of course, one of the staples of quantum theory – and one illustrated quite well by the Schrodinger’s cat exercise – is that just measuring a waveform alters it. The object being measured essentially has to “choose” one state to be in at the moment it’s being measured. To get around this problem, the team measured system’s waveform millions of times to accumulate a reliable probability of the state the device would be in at any given moment. Cleland is hopeful that his research could be used to explore how the rules of quantum physics present themselves in larger, observable scales. And it looks likely that the experiment might finally put to bed the question of whether the cat in the box is alive or dead (it turns out it’s moot). Mee-ow!

See more in Quantum Leaps or under Science. March, 2010.