Bad timing and politics have ruined more than their fair share of great ideas, including New York City’s first underground train system. The pneumatic system was developed by Alfred Ely Beach in the late 19th century and the first demonstration was carried out beneath Broadway in 1870. The Beach Pneumatic Transit System never realized its potential, though, after being derailed by political interests and the Long Depression of the 1870s. It’s an interesting piece of New York mass transit history that was well before its time and suffered an undignified death.

The concept was admirably simple, and familiar to anyone who has used the drive-through lane at a modern bank: powerful rushes of air moved cars along an underground tube. Beach’s permit to build an experimental tube underground only gave him clearance for developing a package delivery system, so the passenger system that he was working on was developed rather clandestinely. Due to pressure from politicians who were investing in competing technologies, Beach never secured permission to extend the tunnel into a full-blown operational pneumatic railway. 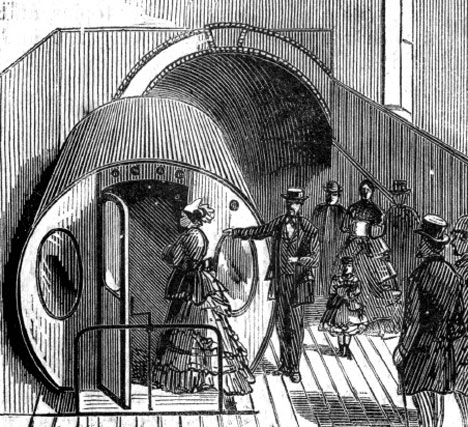 But for the few months that it was in existence, the underground system was mightily impressive. The 95-meter-long tunnel ferried passengers between Broadway and Murray Street at night; because the tunnel itself was so fascinating to New Yorkers, it was open for walking tours during the daylight hours. Elevated trains gained favor because of their lower cost, but eventually the New York transit system moved underground. The death of the idea came about partially because New York Governor John Hoffman vetoed any measure to build underground tunnels, partially because landowners were afraid of possible damage to their buildings, and partially because the American economic system all but collapsed in 1873. The tunnel, station and carriage associated with Beach’s line have all been destroyed over the years.  (Source: Wired)