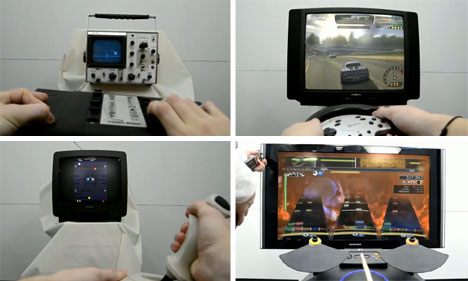 Video games have been applauded as the entertainment of the future and dismissed as brain-ruining wastes of time. No matter how you feel about video games, it’s hard to ignore the impact they’ve had on society and technology in their relatively short existence. This short film made by four Munich university students nicely illustrates the evolution of gaming from the very first video game (even before Pong!) to the current generation of wildly interactive music-playing games.

Gamers will undoubtedly notice that quite a few well-loved games are missing from the film. The students behind the project acknowledge that they could have covered more games, but with limited time and resources they used what they could. Due to the “one-shot” nature of the film, adding more games and more systems would have meant more chance for mistakes that would have caused the crew to start the entire take over. The video games highlighted in the clever little film are:

See more in History of Tech or under Vintage & Retro. January, 2011.