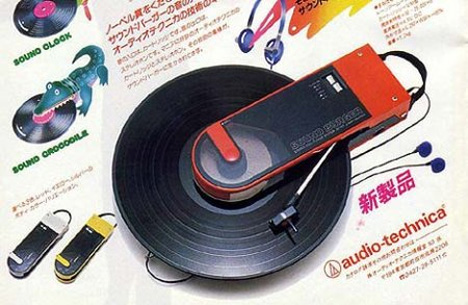 Modern gadgets are remarkably small considering everything that they can do (hello, phone that plays Sudoku, streams radio stations and lets us take crystal-clear videos of our bizarre neighbors), but our generation was far from the first to think of miniaturizing stuff. Back in the age of records, the Sound Burger was amazing music lovers with its shockingly tiny size and portability. It was basically a clamp that could fit onto either 45 or 33 1/3 RPM records so you could keep your tunes rolling even when you were on the go. Of course, because it had to be played on a flat surface you had to be basically sitting or standing still while it played…but at least you could switch rooms between records. 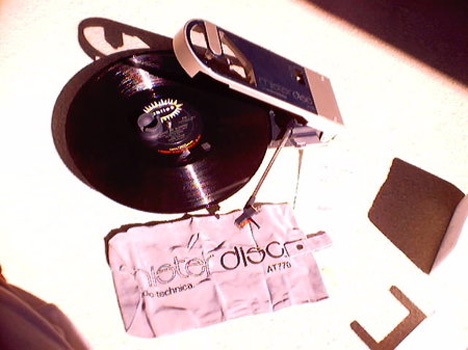 The Sound Burger was sold in the early 1980s in Japan, but after it made the jump to the U.S. it was renamed Mister Disc – probably because Audio Technica, the company responsible for the awesome gadget, knew how we brutish Americans would mercilessly make fun of something called a “Sound Burger.” Unfortunately, even the love of rich vinyl sound couldn’t save this player from a sad fate. It was released right around the time that Sony’s Walkman was becoming popular, and given the choice between a cassette player that you could walk around with and a record player that you couldn’t…well, we all know how the story ended for the ill-fated Sound Burger/Mister Disc. Luckily for modern vinyl lovers, they still pop up every now and then on eBay – but they always seems to pull a hefty price.

See more in Epic Failures or under Vintage & Retro. September, 2011.