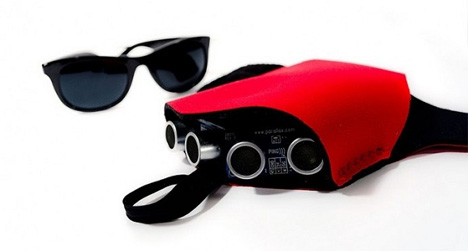 Some blind people have famously taught themselves to use echolocation to “see” obstacles. But because learning this talent isn’t possible for every visually impaired person, Grathio Labs invented Tacit, a hand-mounted sonar device. The gadget straps on to the back of the hand rather than the palm to allow users to use both of their hands as usual, but with an important enhancement: the device applies pressure to the hand to indicate nearby obstacles.

As explained in the video above, the pressure on the back of the hand increases as the user gets closer to an obstacle. The Tacit device wouldn’t be of much use out in the world at large, but at home or in an unfamiliar building the gadget can help visually impaired people get around safely. Since the response time of the Tacit is very fast, users can rely on it to guide them around in real time without worrying about missing any important information. There might be some room for improvement – such as reducing the gadget’s size, but it’s a great start on an awesome product.

See more in Industrial Design or under Technology. September, 2011.