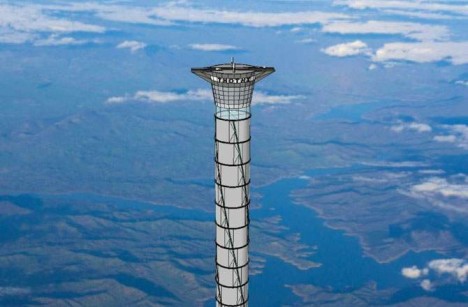 The elusive concept of a space elevator has been around for more than a century, but until now it’s been difficult to imagine having the technology to actually make it happen. Canadian company Thoth Technology has been granted an American patent for an inflatable space elevator jutting 12.4 miles into the sky from Earth’s surface.

The goal of a space elevator isn’t to provide a roadway all the way to the moon or another destination. It’s all about elevating a space vehicle high enough that it won’t need as much lift as it would if it were taking off from the ground. A conventional launch requires rockets and a lot of heavy fuel to lift the vehicle. If the launch were to take place miles above the planet’s surface, there would be less of a gravity struggle to deal with, less fuel to use up, and a much lower cost to launch. 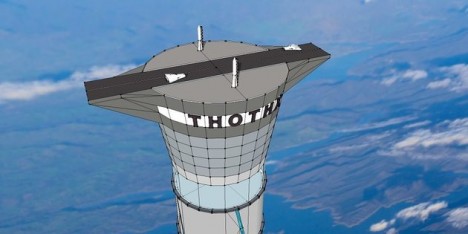 Using the Thoth elevator as a lift-off and landing place, the company estimates that space flights could use up to 30 percent less fuel per launch. The elevator’s platform would act as a place to launch, refuel, land, and relaunch – making space travel just a little more like conventional passenger jet travel.

The elevator, if ever constructed, could dramatically cut down on the cost of launching supplies and people into space. In the patent, the 20 km high structure is made of inflated sections held in place by pressurized gas. We’ll be interested to see how that construction stands up to the rigors of being so very tall and anchored to the Earth. In any case, the patent is a starting point, and the company can refine the details from there.