10,000+ Subscribers
Get Ready for a Geekasm: DIY TRON Lightcycle Board Game 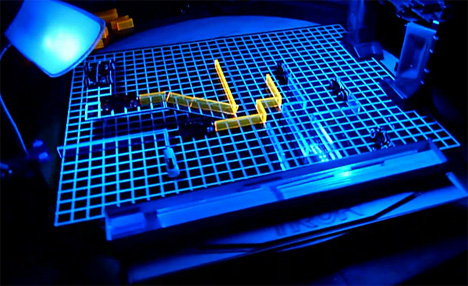 It’s no secret that anything Tron can make our nerdy senses light up and put a grin on every geek’s face. But this particular Tron project is so awesome it is almost beyond words. Make forum member Brett King built a one-of-a-kind Tron board game to play with his kids. You might not think that a game about lightcycles would make any sense, but it totally does if you are at all familiar with the Tron movies. 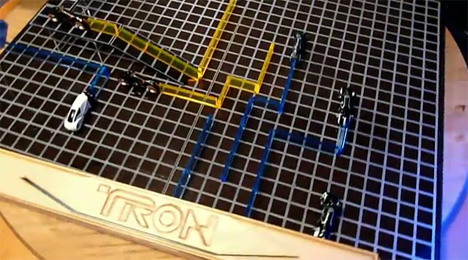 King bought die-cast lightcycles and a Recognizer, then set out to build the game board and pieces. The board is laser-etched acrylic painted with special black-light paint. The lightcycle trails are differently colored cut acrylic. The whole thing is mounted on a spinning base to make the game board easy for everyone to reach.

From there, the game goes pretty much like you would expect: you try to get your opponent to crash into your trail. Since this is a homemade game with no pre-existing rules, King and his kids are still figuring out exactly how to make all of that happen. But sadly, the Game Creator has no plans to sell his invention – so unless you want to build your own, he and his lucky, lucky kids are the only people who will ever get to play with this masterpiece of geekdom.