You may think you know how to operate a fire extinguisher, but until you are faced with a fire you can’t know for sure if you would be able to read (and follow) those directions in an emergency. This thing just takes all of the guesswork out of house fires for you. Instead of pulling a pin, squeezing a trigger and sweeping from side to side, you only have to throw it at the fire. Which, admit it, is your first instinct when you see a fire anyway, right? 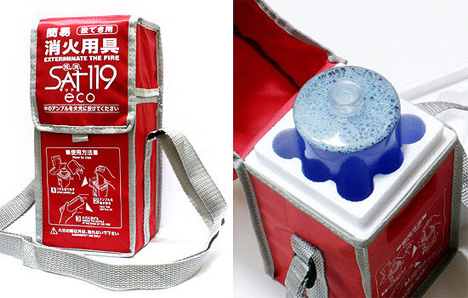 The Nagekesu SAT 119 is a Japanese fire extinguisher meant to quickly and cleanly put out a small fire with no fuss and no reading instructions. The capsule is filled with aqueous potassium carbonate which suffocates the fire and controls the situation before it gets out of hand…no pun intended. When thrown – or even dropped – the easy-break container splits open and lets the potassium carbonate spill out to control the fire.

The super-easy fire extinguisher isn’t a new idea; it has actually been around for decades, but since an accurate throw is required to get the liquid to its target the pull-and-spray extinguisher is much more widely used. Still, if you have a thing for novel fire-fighting technology (and who doesn’t?) this could be a good second layer of fire-ending protection to keep around.