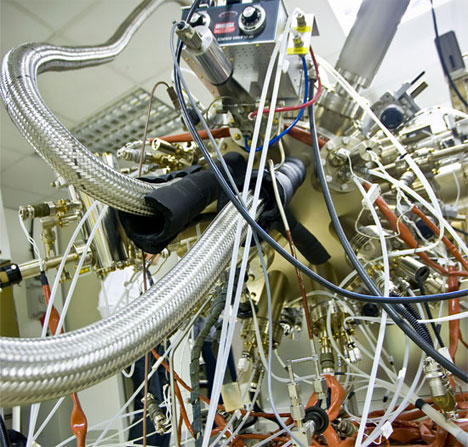 When new technology is being created, the needed parts often don’t exist yet. How do scientists, engineers and researchers invent the bits and pieces that go into brand new gadgets? With a massive gadget-growing machine, of course. The above monstrosity is an MBE, or molecular beam epitaxy machine. Working in a super-cooled low-atmospheric pressure environment with building blocks the size of atoms, this machine constructs the components of tomorrow’s electronics. 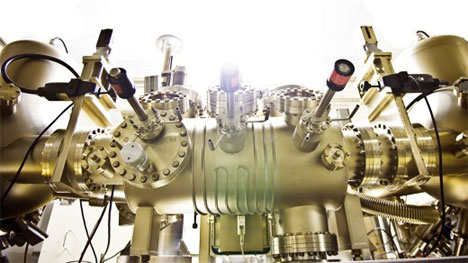 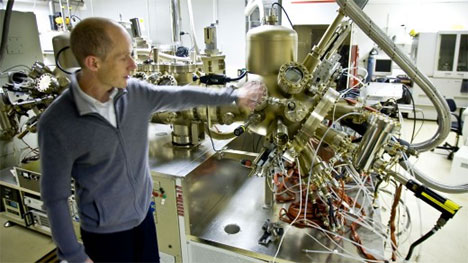 This particular MBE resides in the laboratories of Sharp just outside of Oxford, England. It, like other MBE machines, uses a process that is somewhat similar to 3D printing – but on a much, much tinier level. Microscopic pieces of materials are manipulated and put into place to build newly-invented high-tech gadgets. The components being created are far too intricate and tiny to be built by human hands, making it essential to use space-age technology like MBEs to keep technology moving forward.

Sharp’s MBE is a much smaller version of those used to manufacture gadgets for commercial production. As intimidating and complex as it looks, this baby MBE is only used for experimental and developmental purposes. It works in an artificial environment similar to the conditions found in space, piecing together bits of material too small to see in order to invent the next generations of cell phones, computers and other techy goodness.

See more in Industrial Design or under Technology. August, 2011.