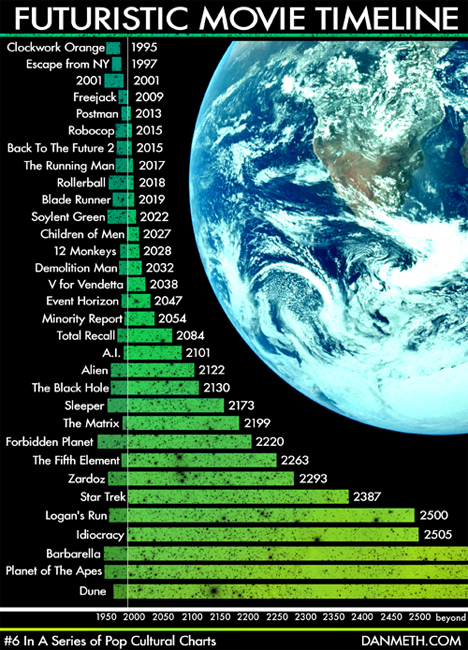 Movie geeks are very particular about the facts surrounding their favorite films. They’re equally protective of the relative ranking of their favorite movies. Cartoonist Dan Meth has put both into perspective. In his Series of Pop Culture Charts, Meth examines everything from the Beach Boys’ song topics to the location of the kitchen relative to the living room in his favorite sitcoms. The Futuristic Movie Timeline, above, gives the location in time of 32 of the most well-known futuristic movies. It also shows the year the movie was released, giving a visual taste of just how forward-thinking the filmmakers were. Charts, sci-fi, semi-obscure data arranged in an aesthetically pleasing format: it’s like geek bliss. 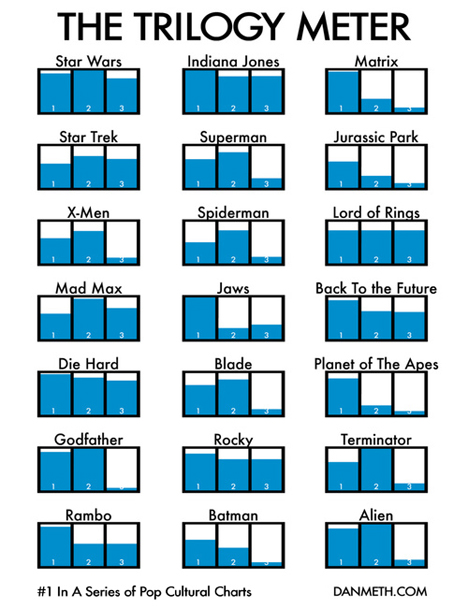 And the chart for which Dan Meth probably receives the most grief: the Trilogy Chart. This chart, while perhaps not as gloriously geeky as the one above, sets out in graphic form the artists’ own ranking of 21 three-part movie franchises. Obviously the chart won’t mesh with everyone’s opinion of the first and second films in a series, but can we all agree that, more often than not, the third movie in a series kind of sucks?

See more in Science Fiction or under Science. October, 2009.