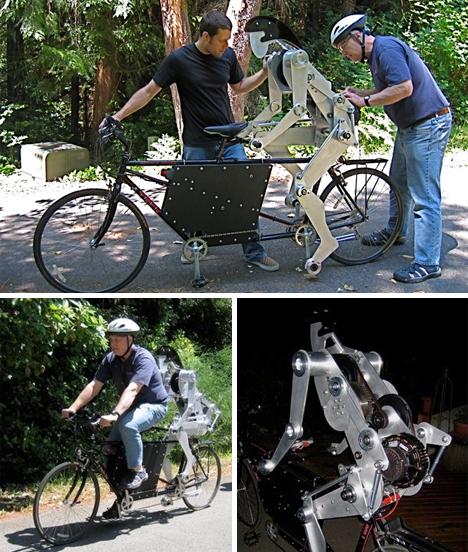 Who doesn’t enjoy a nice bike ride, especially when it’s with someone you love? If you’re as addicted to robots and technology as we are, or if you’re just really lazy, this invention is right up your alley. Meet Joules, the bicycle-pedaling robot. He sits on the back of a tandem bike, patiently doing all of the work while his human companion rides in ease on the front. Normally this would cause us to incite panic by pointing out how that robot is going to get sick of doing all the work and eventually rise up to punish humanity, but Joules seems like the quiet, accepting type.

Joules’ creator, an enigmatic figure known as Carl, created the whole setup both as a response to a challenge from his son and as a way to show kids that creating things can be fun. Altogether, the bike and the bot weigh around 200 pounds. The project took about four months to complete and certainly doesn’t look like an amateur project. The video of Joules doing its thing is oddly relaxing. It’s enough to make us kind of want a robot bike companion, too.

See more in Bikes & Cycles or under Transportation. November, 2009.