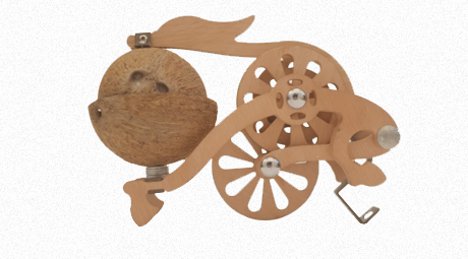 Riding off into the sunset just doesn’t have the same impact when you do it on a bicycle. That’s why the good folks at Original Content London have invented Trotify, a simple – and completely silly – way to make your bike sound just like a galloping horse. Monty Python fans will recognize the premise, but even if you’ve never seen a Monty Python movie it’s hard not to smile when you think about a bike barreling down the street sounding like a horse.

Trotify comes flat-packed for assembly at home. The coconut shells are not included, so you’ll have to find a coconut and cut it open yourself. After it’s assembled, Trotify simply connects to your front brake mount. Then as you ride, the two halves of the coconut shell clap together and make a sound like a horse’s hooves hitting the road. The collective behind the funny idea will be selling the kits for £25, but they need to get at least 1000 orders before they can begin production.

See more in Mods & Custom or under Transportation. November, 2012.