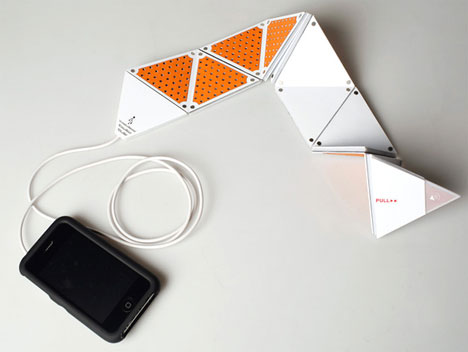 Some of the best and brightest product designs are those where form and function are intimately linked: where the shape of appearance of the object controls the way it works. The Flexible Speaker concept from Chun-Chieh Yang is a beautiful example of function that ties in perfectly with form.

Looking more like a decorative object than a functional one, the speaker hides its true identity well. You’d be forgiven for mistaking it for a child’s toy or even a bizarre piece of costume jewelry simply because its appearance is so fundamentally different from other portable speakers.

The amazing part of the design is that the volume goes up or down when the speaker is unfolded or folded, respectively. This feature frees the user from the fiddly necessity of buttons or remote controls and lets one control the volume with simple intuitive movements. It’s somewhat reminiscent of an audio version of the Rubik’s Cube, but with far less frustration.