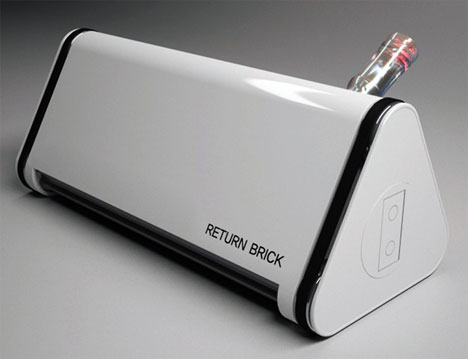 The construction industry is historically one of the most wasteful parts of our society, with an astonishing amount of both pre-consumer and post-consumer waste. Brick and concrete can be reclaimed, but the smaller pieces often end up in landfills. The Return Brick concept is a neat idea from designers Youngwoo Park, Hoyoung Lee and Miyeon Kim that would scoop up small fragments of bricks and concrete and refurbish them into brand new bricks right on the job site.

The device itself is a cute little robot that looks a little like a vacuum cleaner. It takes the broken bricks into its chamber, pulverizes them and adds water. The brick dust solidifies into brand new bricks which are just as solid as any others. 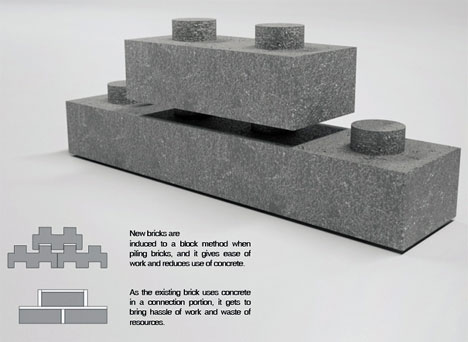 The renderings show the new bricks in the shape of super-sized LEGO bricks, complete with little interlocking protuberances. While it’s a fun idea to recycle construction waste into LEGOs, the idea might actually be better realized with ordinary rectangular bricks. Still, the Return Brick is a great concept for cutting down on the trash involved in construction.

See more in New Materials or under Science. June, 2010.