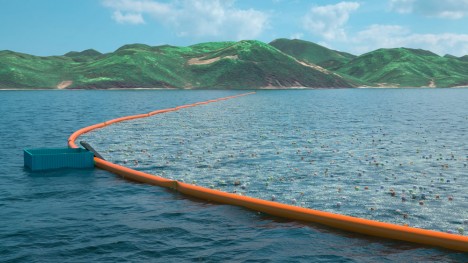 Designed to target key points in global oceanic trash circulation, addressing a 7-million-ton problem planet-wide, this system has rapidly evolved from conceptual and inspiring idea in the mind of a teenager to feasibility-studied, fully-funded project set to go live next year.

Boyan Slat‘s approach is going to be set up near the coasts of Japan and South Korea, tackling one of the most major passageways for garbage currently known, using “an anchored network of floating booms and processing platforms that could be dispatched to garbage patches around the world. Instead of moving through the ocean, the array would span the radius of a garbage patch, acting as a giant funnel. The angle of the booms would force plastic in the direction of the platforms, where it would be separated from plankton, filtered and stored for recycling.” 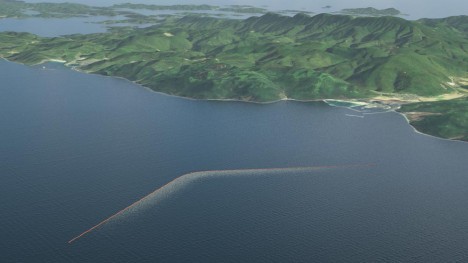 The initial array will span 2000 feet and be the longest floating structure built to date. One of the project primary targets will be the giant gyre known as the Great Pacific Garbage Patch – Slat’s organization, The Ocean Cleanup, believes this giant repository of waste could be cut in half within ten years. Some of the gathered trash will be recycled and other portions turned into biofuels.

Unlike other designs with similar but perhaps too bold of ambitions, this takes a surgeon’s scalpel to the problem, aiming to solve the largest areas first and with the least time and energy necessary. From from the project website: “The Ocean Cleanup develops technologies to extract, prevent, and intercept plastic pollution. The Ocean Cleanup’s goal is to fuel the world’s fight against oceanic plastic pollution, by initiating the largest cleanup in history. Instead of going after the plastic – which would take many thousands of years and billions of dollars to complete – The Ocean Cleanup uses long floating barriers to let the ocean currents concentrate the plastic itself. After having worked with a team of 100 volunteering scientists and engineers, a 2014 study confirmed the passive system is indeed likely a feasible and cost-effective method to remove half the Great Pacific Garbage Patch in 10 years’ time.”