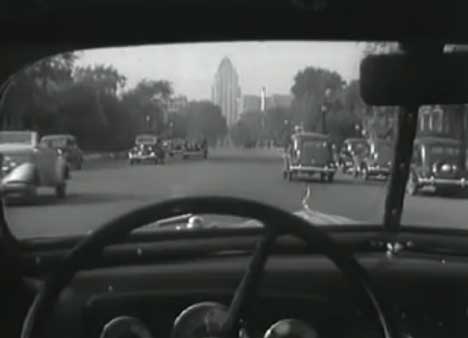 Whether you’re a fan of cheesy vintage instructional videos or just love old cars, this vintage 1936 car safety video is a gem. Produced by Chevrolet, “Formations” gives an eight-minute overview of defensive driving and why it’s important to be aware of all of the cars around you when driving – almost as if you were flying an airplane in a formation. The video features the booming narrator’s voice giving instructions, and the clumsy driver cracking wise as he haphazardly navigates a car around the city. Model cars give a helpful “airplane view” of all of the driver’s mistakes.

The video was produced three years before turn signals became a standard feature of cars, and many years before they became a requirement, so it’s easy to understand the need for instructions like these. In fact, it’s not that different than driving safety films that are still shown to fledgling drivers today – the main difference being that not many modern driving videos would dare to insinuate that a fully-grown man needs driving lessons.

See more in Vintage Videos or under Vintage & Retro. March, 2010.