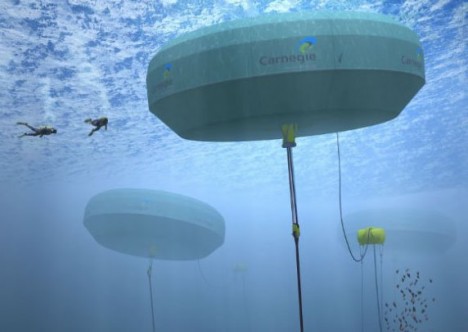 Deployed off the coast of Australia, the first electricity grid-connected wave power station on the planet has been switched on. If deployed broadly and at scale around Western Australia, this system could ultimately provide more than 10 times the entire power requirements of the state. 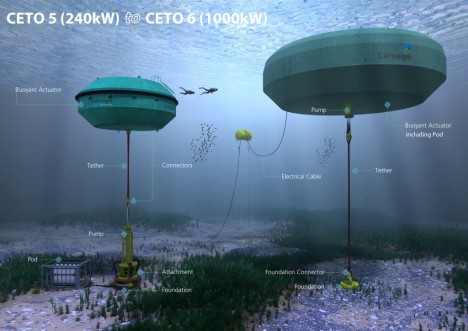 Developed by Carnegie Wave Energy, the specific technology is named CETO (after a Greek goddess of the sea) and converts ocean swell into zero-emission renewable power as well as desalinated freshwater. Being underwater, the system is designed to be safe from unpredictable and dangerous surface conditions.

The round, submerged buoys are tethered to seabed pump units, which are installed at a depth of between 25 and 50 metres. Waves crashing into the buoys drive the pumps, which push pressurised seawater through a pipeline beneath the ocean floor to an onshore hydroelectric power station. Here, the high-pressure water drives a turbine and generates electricity.

The process of creating freshwater utilizes elements of the same system. “The high-pressure water can be used to supply a reverse osmosis desalination plant, replacing or reducing reliance on greenhouse gas-emitting, electrically-driven pumps usually required for such plants.”