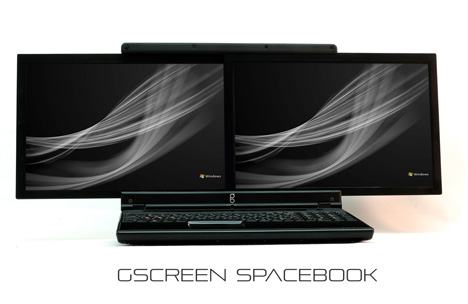 Every office warrior needs dual monitors just to get through the day, right? But then don’t you feel a little unfulfilled going home to your laptop that only has one screen? Not to worry, ubergeeks: a new generation of laptops with built-in dual screens is slowly making its mark on the computing world. The gScreen SpaceBook, above, was a beautiful rumor for a long time. Finally, the company has announced that the 8.7-pound laptops with twin 15.4 inch screens and full-size keyboards are going into production. Hardware-wise, they look like heavy-duty (and super sexy) machines. Add in the unique sliding screens and we’re ready to sign a prenup. 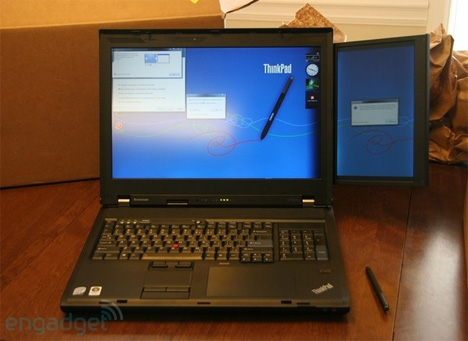 Lenovo took their dual-screen laptop in a slightly different direction. The second screen on the ThinkPad W700ds isn’t a full-size one; rather it’s a 10.6″ mini-screen that hides behind the beefy 17″ main screen. When it’s needed, you just pull out the second screen and go to town on those extra-wide documents or multiple applications. The computer itself is substantial enough to handle pretty much anything you can throw at it, and the integrated Wacom digitizer inches it closer to a primary computer than a secondary one – though not if you do heavy-duty graphics work that would be cramped on the mini-Wacom. 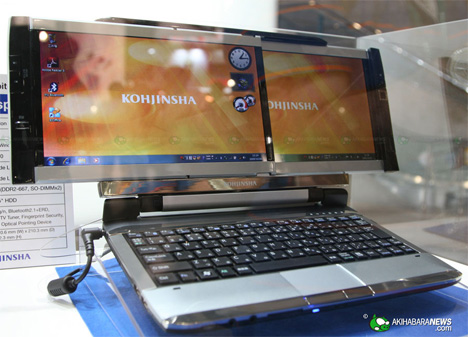 Kohjinsha’s dual-screen laptop offering is just as enticing as the other two, but at this point there’s no release date set for it yet. Like the gScreen, this one features a second identical screen that slides out when you need it and tucks nicely behind the main one when you don’t. The screens are quite a bit smaller, though, coming in at 10.1″ each. Based on the little information available about the prototype and its possible retail future, it seems like this one could give the other dual-screen laptops a run for their money at some point.

See more in Computers or under Gadgets. December, 2009.