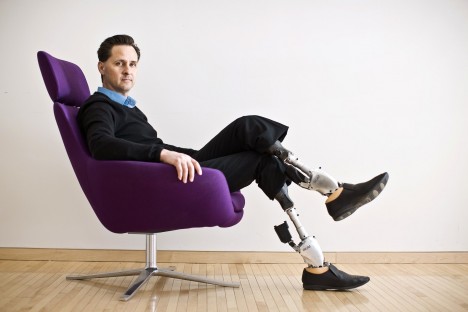 Within our lifetimes, we will see replacement limbs exceeding the capabilities of the ones humans are ordinarily born with – already they outperform in certain tasks, but soon they may well be better on all fronts.

In the video below for WIRED, MIT Media Lab’s Hugh Herr explains how he looks to nature when developing new bionic appendages. The amputee and avid rock climber discusses how his biomechatronics division is pioneering the technologies that aim to augment human physical capabilities.

Similar themes are also found in Herr’s TED Talk, in which he discusses building the next generation of bionic limbs, robotic prosthetics inspired by nature’s own designs.

Herr lost both legs in a climbing accident 30 years ago; now, as the head of the MIT Media Lab’s Biomechatronics group, he shows his incredible technology in a talk that’s both technical and deeply personal — with the help of ballroom dancer Adrianne Haslet-Davis, who lost her left leg in the 2013 Boston Marathon bombing, and performs again for the first time on the TED stage.

See more in Cybernetics or under Technology. November, 2016.