It never fails: at every swanky yacht party you go to, there’s some party pooper who just can’t handle being out on the water. Usually you’d push those people inside the cabin to avoid ruining the party, but designer Liviu Tudoran has a somewhat more humane idea. His Delta Yacht concept is described as a yacht for “non-sea lovers,” or those who want to be able to yell “I’m on a boat!” but have never actually been on a boat before. 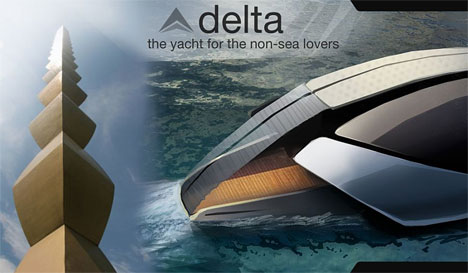 The Delta offers a safe and relaxing environment for people who don’t have much experience traveling on the water. Rather than a majority of wide-open spaces, the Delta has high safety railings and ceiling panels that can be moved to cover or uncover the passengers as the weather – and, presumably, the passengers’ moods – will allow. 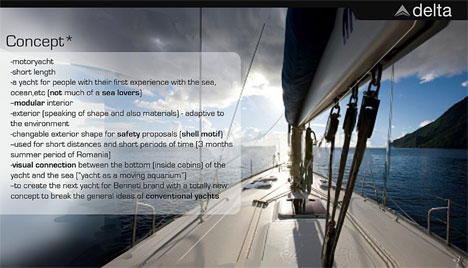 Those removable roof sections are made of piezoelectric material, allowing the yacht to produce some of its own power from its movement on the sea. 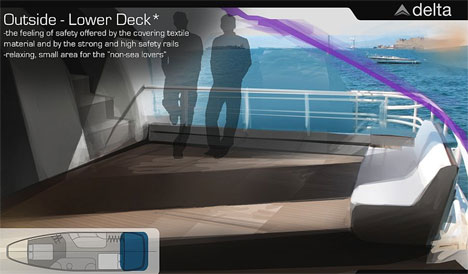 Inside the belly of the yacht, a glass bottom lets passengers watch the sea life pass by. The Delta is meant to be used only for short journeys of three months or less, not as a more permanent sea-faring residence, so these features cater to those who are getting their first taste of the ocean. 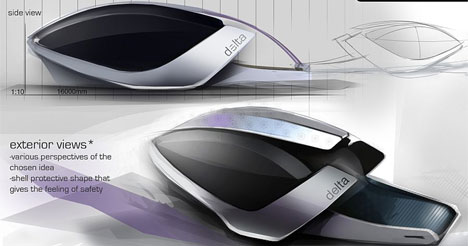 The interior is modular and changeable, and the exterior of the yacht likewise changes shape to suit the passengers. The fluid sculptural shape of the yacht was inspired by traditional Romanian sculpture and architecture. So far the Delta is just an idea, but your future yacht parties might be just a little greener – and friendly to landlubbers – if it ever goes into production.

See more in Concept Vehicles or under Transportation. August, 2010.