10,000+ Subscribers
A is for Atom: Kooky Look at the History of Atomic Power 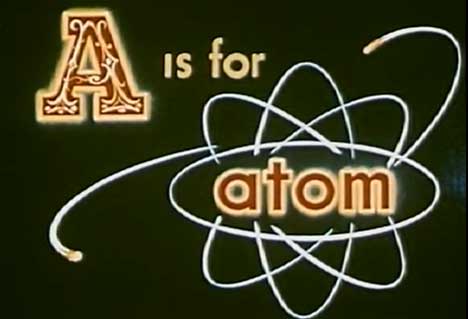 When President Eisenhower gave his legendary “Atoms for Peace” speech in 1953, America was already in the midst of a full-blown public relations campaign to make atomic power seem friendly and safe. Following the nightmare at Hiroshima, most of the world was terrified of this horribly powerful technology and feared that it would soon bring about the end of the world. In an effort to dispel the myths and misgivings surrounding atomic energy, various corporations began producing educational films like this one.

“A is for Atom” is a strange trip through General Electric’s imagination, where atomic energy is portrayed as five helpful giants completely under the command of humankind. If you grew up in the 1950s or 1960s, chances are you’ve seen the film a few times already. For the rest of us, though, “A is for Atom” is a somewhat scary reminder that we were using this awesome power long before we understood it…and that we once entrusted our lives to companies like GE.

See more in Vintage Videos or under Vintage & Retro. April, 2010.